Once there was a yearling wolf named Luka. One early morning, she was taking a walk with her best friend Sophia, the Doberman, along the wooded trails around the great big Lake Voyageur.

It was mid-spring. The sun just poked its head over the tall mountain on the other side of the lake. The does and their fawns, exhausted from their frolicking and grazing, were fast asleep in the tall grass; where young Luka kissed the dew off the blades gingerly, taking care not to disturbed the napping deer.

Suddenly, Luka noticed a couple of Canada Geese gliding in the middle of the Lake.

I outrun anyone I’ve ever met on land, humans and beasts alike, I can certainly out-swim some “mere” geese, Luka convinced herself and decided to give them a good chase.

But Luka was already 20 feet away from shore before Sophia could finish her sentence.

Paddling with all her might, the distance rapidly shortened between Luka and the geese.

When she was about 10 feet away, the geese turned their heads towards her, looking puzzled, “Run for your life!” Luka shouted good-naturedly.

However instead of running away, the geese started gliding towards her, while making loud calls to their friends, “Help! Wolf attack! Help!”

And their gliding speed – Oh, they are so much faster, like lightening, and their face looked, what, ANGRY?!

Oh, no! Panicking, Luka turned herself around towards shore.

There were noises around her now. And when she finally risked a look-around, she noticed, in her horror, there were not two, but 10, no, 20 geese! All closing in; some even took a little flight, hovering above her head….

In full panic, Luka closed her eyes, took another deep breath and paddled, paddled, and paddled…. 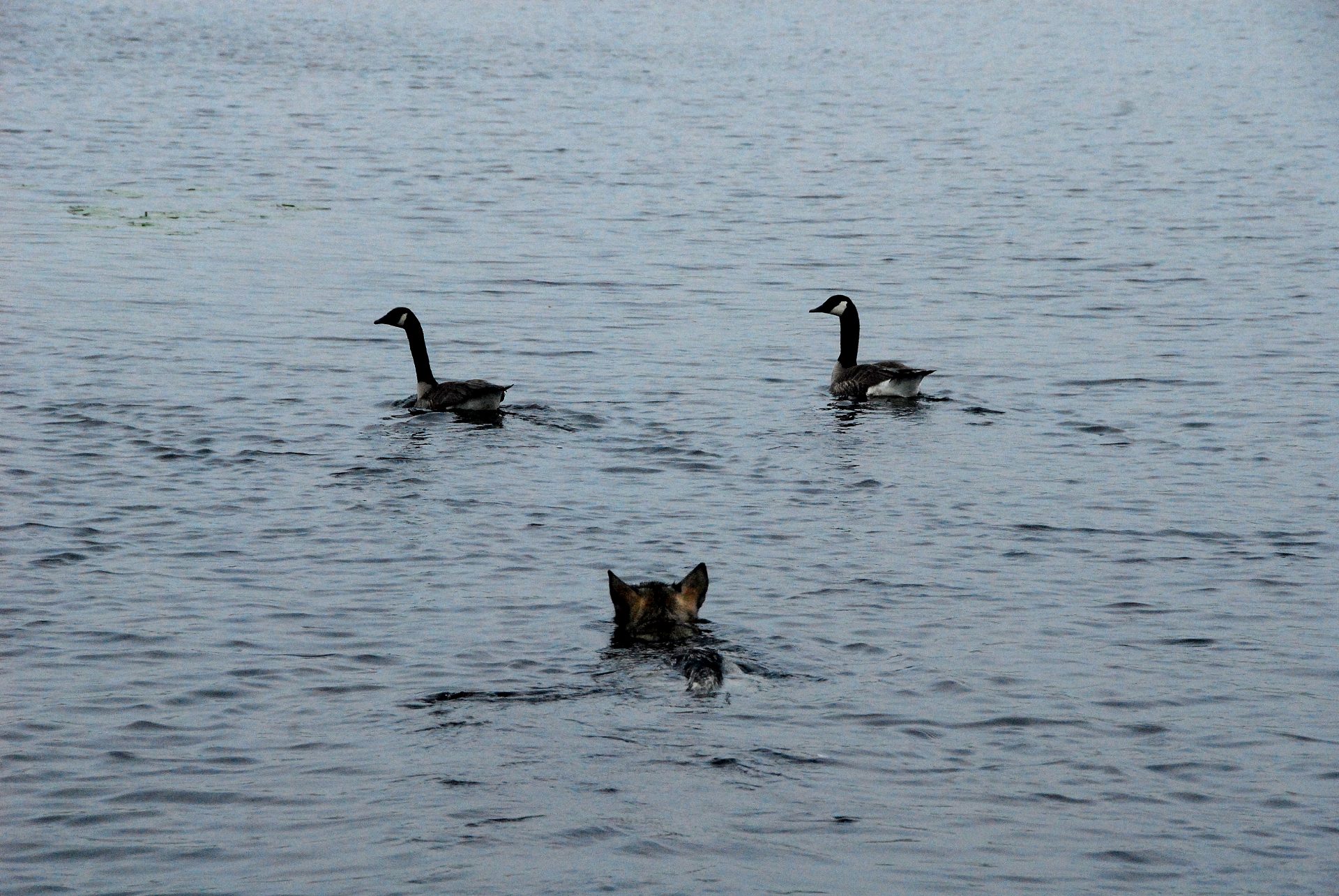 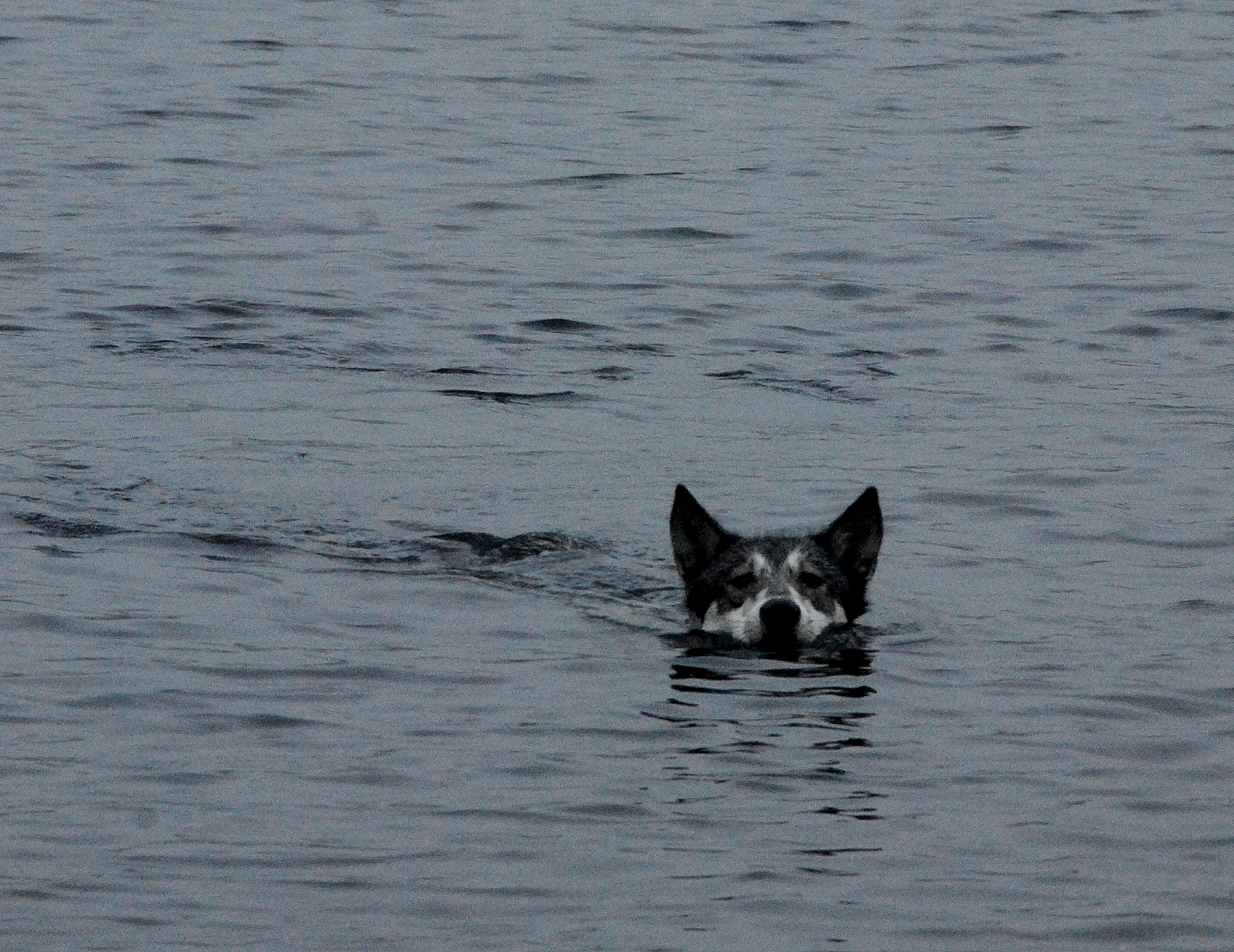 She dared not look anywhere but directly towards shore where Sophia stood waiting.

Sophia, meanwhile, was thinking to herself: I tried to caution her – nothing good could come from being in water. And geese-chasing?! What was she thinking?! Oh, pups – will they ever listen?! She sighed.

Finally just a few feet from shore, Luka’s paws touched the stones on the bottom of the lake. Catching her breath, she ran the rest of the way to solid ground….

After a good night’s sleep and a lot of pondering, the next morning, Luka went back to the lake, accompanied, as usual, by Sophia.

Carefully choosing the biggest and best tasting stick, she took it in her mouth and jumped into the water again.

This time she paddled steadily and slowly.

With a big grin on her face, well, as much of a grin as she could manage with the stick in her mouth, she approached the geese gently.

Reaching them, she dropped the stick right in front of one and said, “Here, I brought you a present. Yesterday, well, that was all of a misunderstanding. I didn’t mean any harm, just wanted a game. Sorry if I startled you. Oh, and you are such great swimmers, and fliers! Do you want to play catch with sticks?!”

One of the geese said, “But of course, apology accepted. Thanks for your token. We thought you meant to eat us! But we don’t play with sticks. Why don’t we play chase?”

Although much faster than Luka, the geese let her catch them a few times, just for good sportsmanship.

They played, played, and played, until the sun was almost directly on top of their heads.

And they parted as the best of friends.

Even the wise old dog Sophia reconsidered her views: Perhaps, just perhaps, sometimes, something good may come out of being in water….

*This story was inspired by a real life “encounter” of my young wolf and old dog. Interestingly, although “deadly fearful” of “humanoids”, my wolf is known to make fast friends with beings from other species. Besides Canada Geese, I have witnessed her playing with miniature horses, emu, robins, hens, and many more. It was the fault of that famous fictional young “liar” called “Little Red Ridding Hood”, who destroyed the “good name” of wolves. But that’s another story for another day.