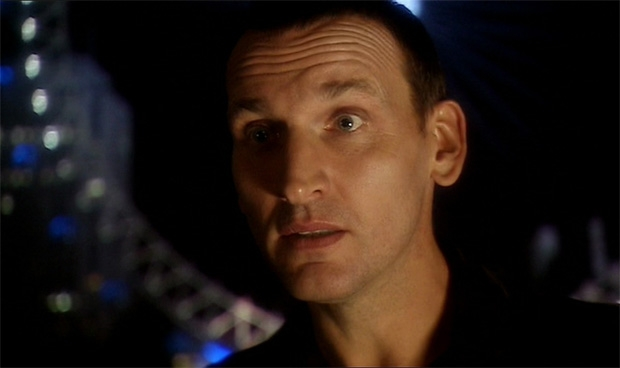 The first part of this Doctor Who episode told a typical sci-fi story:*

An alien ship apparently crashed in London. Inside Downing Street, everything turned upside down. The doctor, with the unexpected help from Mickey, saved our planet from self destruction. Big spectacle ensued in order to prevent the Slitheens from provoking the self obliteration of all five billion earthlings.

The story turned “atypical” the very next day when a distraught Mickey showed up with a tabloid, “I just went down to the shop. And I was thinking like, you know, the whole world’s changed. Aliens and spaceships. All in public. And here it is.”

He stuck the front page in the Doctor’s face.

“They are just not ready,” the Doctor commented nonchalantly, “They are happy to believe something that’s invisible. But if it’s staring you in the face, nope, can’t see it. There is a scientific explanation for that – You’re thick.” 🙂

Admittedly, I might belong to the “thick” and not “ready” in terms of seeing “aliens”. However, I take his comments on a symbolic level, perhaps in order to put my “un-ready-to-see-alien’s-mind” at ease.

Some 15 years ago, I was helping out at a church charity event. It was organized by two kindly elderly ladies, Maria and Eva. Lunch time came around, they began laying food on the tables for the attendees. Some kind of disagreement relating to the “food presentation” arose between Maria and Eva. Suddenly the discussion got so heated for reasons unknown to me. The next thing I knew, Maria raised her hand and slapped Eva across the face. Eva ran off in tears.

Merely twenty minutes later, Maria ran up to me and said, “Oh, you must help clear my name. You’ve known me all these years. Have you known me to be violent?! You know how much I love Eva. We had a disagreement. That’s all. Now she’s spreading rumors that I slapped her! How could she something like that?!”

Not as wise, nor accepting of my planet-mates’ “thickness” as the 900-year-old Doctor Who, I said, “Maria, but I was there, I saw it!”

“Oh, you are with them! You believe the lies!” She looked as though she was ready to strike me as well.

I had no doubt that Maria was being truthful on a conscious level. Much like the minds of the Londoners the day after the spectacular Downing Street “alien explosions” – “loud facts” “vanished” from their conscious awareness, buried under the deep water of unconscious.

Instead of staying with the shocking realization that she indeed, along with most, if not all, earthlings, is capable of physical violence, Maria “chose” willful blindness. Obliteration of the painful insight set in minutes after the event. Perhaps the insight never even had a chance to set foot in her conscious mind at all. Of the latter nobody knew for certain. All I was privy to was that lies rushed in to “protect” the long standing self image, accompanied by the deep feeling of hurt as an emotional layer of “support”.

After a lifetime of being God awe-ing and fearing, Maria’s quick banishment of her burst of violent “slip/act” to the underworld is understandable. The supreme power of self deception can’t be defeated easily, of course.

Looking back through the eyes of the timelord, I realize that in the face of our conscious “un-readiness”, we are able to block out the “unwanted” images/perception of ourselves and that of the world. The first step to become healthier is the willingness and ability of allowing the reality to enter our conscious mind. For most of us, it is much easier to bury all the “unwanted” to the unconscious and protect our “intact” unhealthy selves and our “peaceful”, status quo of the world view.

Mickey shared an knowing laughter with Doctor Who’s after his “humans are thick” comments, “So we are just idiots”.

“Well, not all of you,” the timelord stated.

Along with all else, Doctor Who is a series of one timelord’s willingness to understand the current “human conditions” while at the same time perceive even the faintest light of our progress. An age old wisdom that I have yet to master indeed.