​Opening a coconut was one of these things that I had not considered until one day, my friend Olivia told me that her daughter couldn’t do it. “Should I buy her a hammer?” I envisioned tying a bow to her newly acquired shinny little present.

Then something occurred to me, “Does one really use a hammer?”

It turns out, NOT.

There are many instructive videos and here is the one I really like. No hammer, power drill or hard concrete on the side walk! 🙂

After opening a couple of coconut following the instructions, I was able to open my 3rd and 4th coconut like a pro, with the coconut “flesh” “intact”. Of course, it is entirely possible that the coconuts purchased from my local stores might be on the dry/old side hence making the outer shell easily separable. Perhaps the picture shown does not boast my “acquired skill” at all but a mere indication of the sub-prime condition of the fruits. 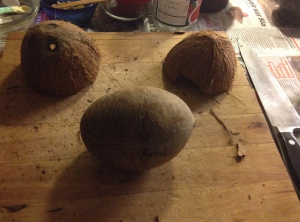 The next few nuts deepened my suspicion – although the flesh separated easily from the outer shell, the expected “snow white” flesh was pink-blueish and tasted “yucky”.

After 3 consecutive “rotten” coconuts, I haven’t bought them in the last few weeks as close inspection told me that “fresh” ones are difficult to come by in our northern climate even in the local Indian grocery stores.

With the help of some youtube videos*,** I learned how to pick “yet-to-be-rotten” coconuts, mature or young.

Hope you are having better luck out there!