A Cockerel in Our Midst 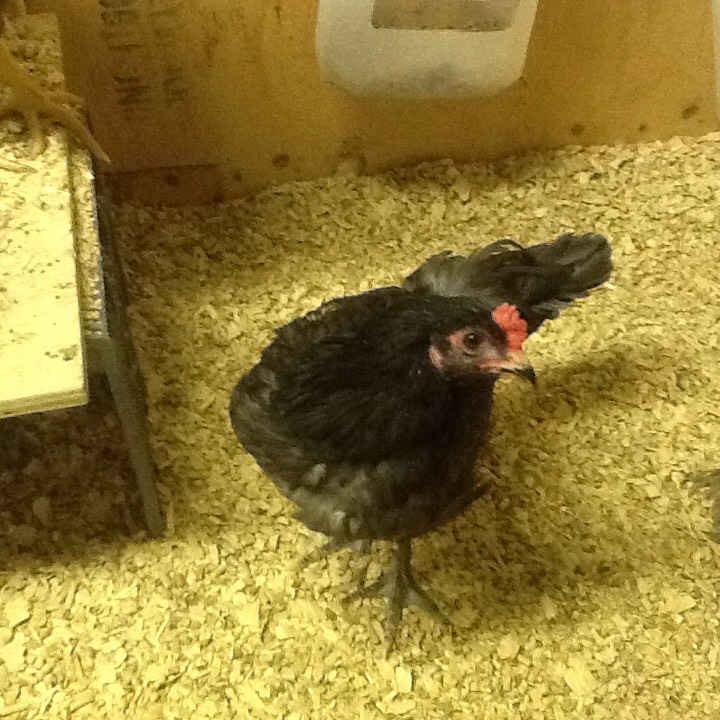 About 3 weeks in (they would be 10 weeks old), one morning around 5am, after giving my hens-to-be their breakfast, I heard a distinct “trying to crow” sound from the basement.

Running down the stairs, I met my “supposed” five hens and 10 innocent eyes, “What, already bringing us some treats?! Is it meat? We love meat.” The eyes scrutinized my empty hands.

I did my best crowing imitation.

Armed with my iPad and a compilation of crows from real mature roosters, I ran downstairs again.

After running the compilation three times in front of my flock, more staring. Nobody took a deep breath, no sound out of any of them.

Then I heard three distinct crows from upstairs!

Upstairs, my elderly dog lay in her chair, sleeping. And my wolf, well, my wolf greeted me with, “cock-a-doodle-doo”!

My mouth dropped open while she did it twice more. 🙂

Then a sound came from downstairs.

Of course when I ran down again, the same five pairs of eye stared back with “innocence”.

I had done enough running around for a day; plus a “crowing wolf” to deal with.

The next day, the same thing happened.

That was when I told my wolf that if she wanted something from then on, she’d have to crow! 🙂

It was not until the next week, I accidentally discovered who was the cockerel. I was doing laundry across from the “hen room” and someone started crowing, I poked my head out the door very quietly and there he was, crowing: once, twice, three times.

Now of course, there was a possibility that sometimes a hen can crow AND lay eggs. Time will tell soon enough.

Another, even less likely scenario could be that my “true hen” starts exhibiting “male characteristics”, making the hen look and act like a rooster. However, such a hen won’t be laying eggs, nor would she/he be fathering offspring.*

In a way, I’d rather my black-hen be a “true cockerel” instead of having all the above “hen-rooster” complications.

All this reminds me of an old Scottish saying, “A crooning cow, a crowing Hen and a whistling Maid boded never luck to a house”.

There is also a “morphed” version of such saying “a whistling girl and a crowing hen always come to no good end”.

As I’m writing this, my cockerel is still trying out his “crowing”. After two whole weeks, he can now manage something like “cock-doo”. It is a certainty that my wolf can still teach him a thing or two about crowing as she easily belts out a full “cock-a-doodle-doo-doo-doo!”

I wonder what would the old Scots say about a “crowing wolf”? 🙂