Getting to Know My Hens-To-Be 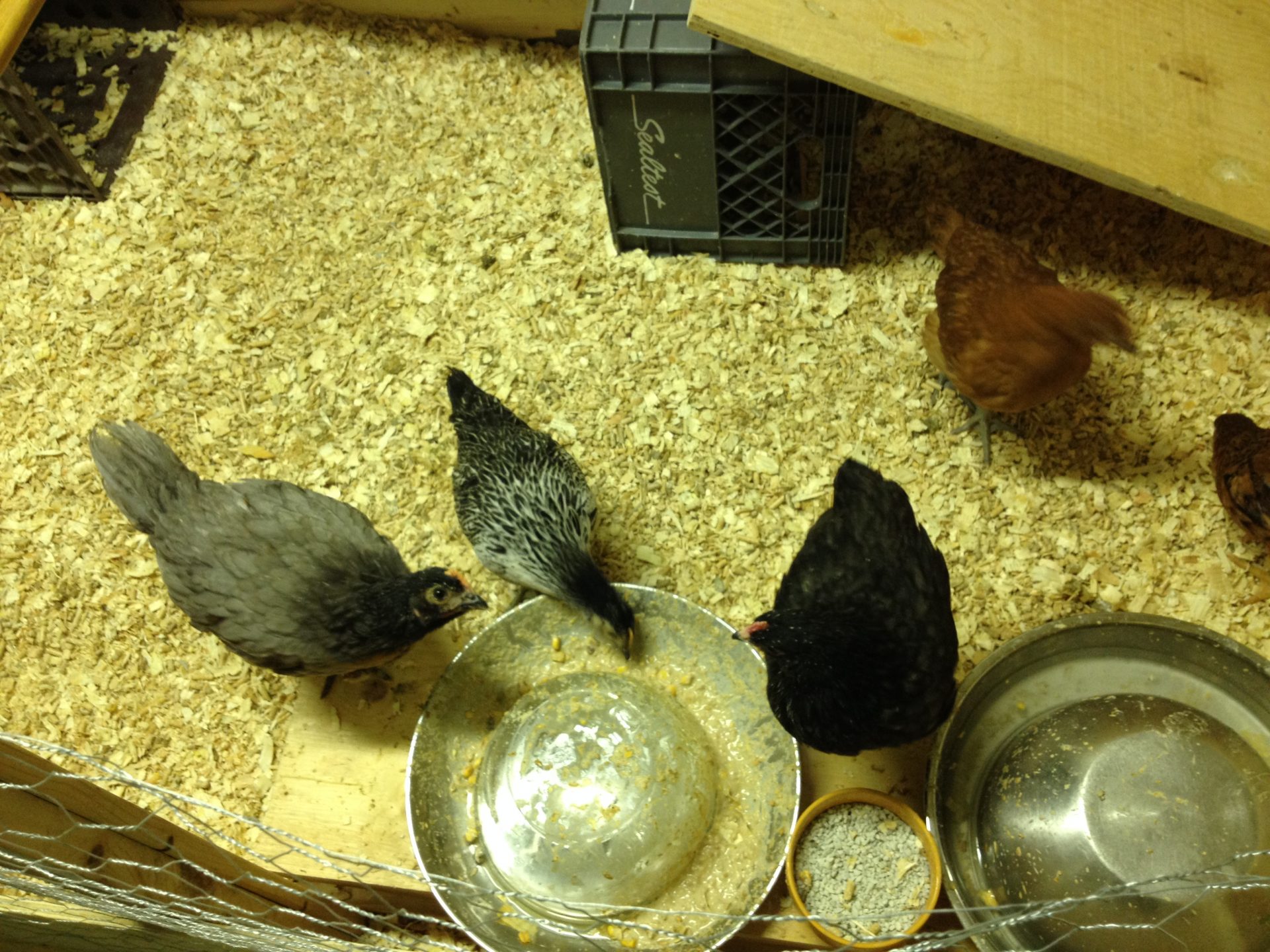 Recently I “acquired” five 7-week-old chicks with the hope that they’d start laying some time in June.

It’s the first time birds and I live in intimate proximity.

Besides being in awe of Dr. Pepperberg’s talking and obviously capable-of-thinking late parrot Alex, I am ignorant of the entire species. Ten days in, the surprises are piling up.

First, my hens-to-be do not seem to have learned the adage “don’t shit where you eat”, literally. Inevitably someone would deliver a “drop’ right in the middle of the serving dish where others were eating. None in the flock seemed to notice. Frequently I caught a bird trying out a piece of fresh poop on top of the litter. Obviously she didn’t seem to like the taste as she would immediately try to wipe and beat her beak against some fresh litter or the wooden side board of the coop. “Served you right, now you know,” I thought. However she didn’t “know” even after the unpleasant experience. Later on, I’d catch the same bird trying out another piece of poop. All five were seen doing this, over and over.

Second, the “pecking order” seemed terribly “stable”. “Give it time,” said one of my patients who has been a poultry farmer for 30 years. Perhaps. As of now, every morning, upon waking up, the chicks would fight for the “pecking order”. A game was made up for just this purpose, at least through my human “lens”. One would pluck a feather from yesterday’s “top bird” and make a run for it. She would then find a “safe place” to destroy that feather while others, including the “plucked”, would try to get the “prize” from her. And if she successfully torn the feather to pieces, she would have won the “top bird of the day”, with minor “arguments” from other chicks. And the next day, well, they’d start all over. In the case the feather was taken from her, the game continued until someone devoured the feather.

A couple of days ago, I decided on an experiment. As soon as the “initiating” bird pluck the feather upon “rise and shine”, I swiftly took it from her. Of course I didn’t tear up the feather like my “crazy” birds, I simply made a show of it and hid the feather in my pocket. Immediately after, I approach the serving dish and pretended to eat from it. Lo and behold, they “respected” my “top-birdness”. Hooray!

Third, a couple of days after their arrival, the black bird started pecking me: my boots, my arms, my legs… I pecked back with my fingers. She loved the game. For about four days, she was the only one playing the game. Then one of the brown bird joined in – and now we are three. The other birds are still “observing”, perhaps wisely recognize my considerable size.

Fourth, my other brown bird was a “gift” from the hatcher as he believed the “under-fur-pecked clean” little critter would be better off with my little flock than in the mix with his mob at the farm. I took her in with the hope that her feathers would grow back only to notice during the first meal that she was the “offender”. While others focused on consuming the freshly delivered sprouted and fermented grains, she would go behind their backs and peck at one, then another. First, the birds would turn and give her a “dirty look” but when they realized that she wasn’t going to stop, they’d peck back and chase her off when she was approaching the plate. Some would peck her as that’s the “chicken way”. They simply “reacted” and “retaliated”. Luckily, a few days in, she stopped her “attacks” and the other birds stopped pecking her, not holding a “grudge” from her “past behavior”. “Healthier” than most of their human-counterpart.

Fifth, I had watched some videos where the free range chicken farmers claimed that corn is “candy for chickens”. Wishing to get on their “good side”, I figured “all healthy grain” and “no candy” would have been no way to welcome my new flock; I armed myself with a 25kg bag of whole corn. I soaked, sprouted and fermented them just like all other grains before fetching my birds.

After five days, I told my wolf, who loves honey and all things “candy-like” and probably takes herself a bear, “you know, those are healthy birds. Each meal, no matter how the corn was served: whole, blended, or meshed, they’d leave them and devour all other grains. Something for you to learn, maybe.”

I wouldn’t be surprised if I come upon a three-year-old “little human” refusing cake next. 🙂

My list goes on: knowledge, fun and game have been had at least on my part.

I can only hope my birds share the sentiment.