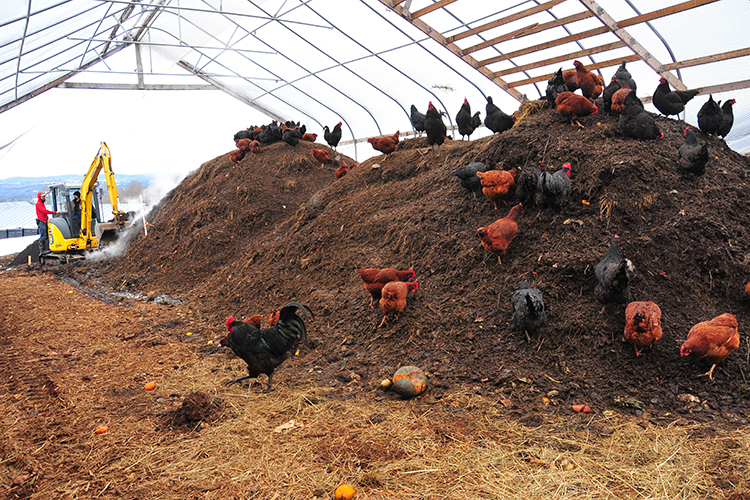 “Our chickens …are welcome to stay where they’d like to be,” Karl Hammer of Vermont Compost Company said.*

Karl started his company with the idea of raising chickens without buying grains and the company morphed into a “giant” of a organic compost producer, on top of selling eggs.

His chickens are “free to leave”. There were no fences, as he stated. However, “outside” there were foxes and other “chicken specific predators” and no GSD dogs to guard them. In the end, his chickens chose to stay where there were plenty of nutritious food, shelter and safety.

Karl’s chickens roam the compost piles, scratching for food with a contented self-expression through their bodies while knowing full well that they may leave at will. They do not because they wanted to be where they are. A high expression of chicken-hood that, sadly, many people do not reach, for “person-hood” that is.

I wouldn’t have minded being one of those chickens myself. 🙂

He was “free to leave”, I told one of my patients the other day, if such self-exploration in my office was not what he believed would be helpful to him. But of course, he was “welcome to stay”. Couldn’t resist the temptation, he was told the whole “chicken story.”

“I know very well I can’t thrive by myself on the outside,” he replied, “Surviving, yes. Thriving, no.”

And yet, he hesitated to “dig in” to his internal life. The reason, he stated, was due to the fact that when he was a “young chick”, he got bitten by a garter snake. So startled was he that the “nightmare” of what’s buried under his “internal compost pile” invited terror; even though he was far beyond the age and strength of a cockerel at the present time. One does not seem to age “internally” alongside time passing and bodily growth; instead, humans tend to hold on to the sensation of “fragile smallness” from our childhood and build up “resistance” to re-visit our nourishing interior. Simply because something unwittingly harmed us when we were little.

“But you are big and strong now, no longer a down-covered hatchling,” I said.

My patient laughed. A spontaneous burst. The first time in many years.

Sometimes seeing what is truly “there” instead of what one still believes may be “there” is no small feat, I mused.

“That doesn’t mean I don’t feel like a pre-cockerel wobbly little thing,” he smiled, “But I take your point. Maybe time to dig in for the treasure buried underneath the compost pile. Yum, tasty worms, and all that! Snakes be damned.”

Of course the actual work would be much more difficult; unlike Karl’s chickens, who showed only wholeheartedness in their deepest, most fulfilling “self-hood”.