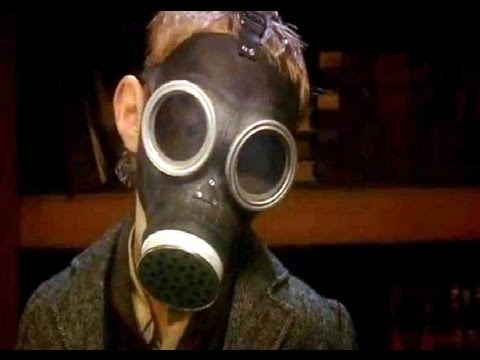 “Where is my mummy?”

Those were the daunting words uttered by a child in the bomb “infested” London. From first glance, he wore a gas mask. Upon closer “inspection”, the gas mask seemed to be part of his face; not at all a war time “accessory”.

Anyone who came into contact with the child would be “transformed”, losing their own body and mind. Everyone, old and young, soldiers, widows, doctors and starving children. They all “grew” gas masks. On top of that, they would all begin a journey desperately in search of their “mummy”, uttering only those words of the child who was their sole “sire”, cloned from a single touch.

Eventually, the Doctor figured out that Nancy, who was indeed the once dead child Jamie’s mother, lied to him until his death. That was, until the extraterrestrial all powerful nano-genes, raised him from the dead, due to none other than the German air raid. The accidentally misplaced, lucky for the earthlings, nano-genes encountered the first human when they were released in the height of the London Blitz, figured that humans “should” look, feel and behave like the dead child Jamie. They revived him, gave him power and voice, and enabled him to “develop” an army in search for his “mummy”, whom he had never known. And yet in his young heart of hearts lay the knowledge that the young teenage single mother, was indeed not his sister whom she pretended to be.

At the pivotal moment when Jamie and his “army” were about to transform the entire human race to the likes of their minds and bodies, effectively erasing our species from its “natural state”, the Doctor urged Nancy, “The survival of the human race is in your hands! Tell him the truth!”

Rising to the occasion, Nancy whispered to the distraught and despairing Jamie-not-look-alike, “I am your mummy! I will always be your mummy! I’m so sorry. I am so, so sorry.” The Doctor urged the nano-genes, “Come on, please. Come on, your clever little nano-genes. Figure it out. The mother, she’s the mother. That’s got to be enough information. Figure it out!”

Suddenly Jamie was pushed away from Nancy’s embrace by the nano-genes. The Doctor ran to the child, “Oh, come on. Give me a day like this. Give me this one.” He gingerly took of the once-again-removable gas mask from the child’s head. Excited, he proclaimed, “Welcome back!” and threw the child up in the air, “20 years till pop music, you are going to love it!” The nano-genes indeed recognized the mother’s superior DNA – Nancy changed their “minds” and Jamie was returned to his “pre-dead” natural state.

A tear jerking and heart melting moment, no doubt.

Because Nancy was able and willing to tell the truth. Nothing but the truth. Despite the difficulty. In spite of what it would become of her as an unwed mother in 1940s London.

The overjoyed and expectant Doctor sent the nano-genes out, the “learned” tiny beings spread themselves out, healing everyone they once “mis-transformed”. He proclaimed, “TODAY Everybody lives, Rose. Just this once!”

“Waking up”, Mrs. Harcourt confronted Doctor Constantine, who never abandoned his patients until his own “mis-transformation”, “My leg’s grown back. When I come to the hosptial, I had one leg.” The doctor’s response was one of the “typical” Doctor-Who-humor, “Well, there is a war on. Is it possible you miscounted?.” 🙂

If one has learned nothing else from those two episodes, the message of “truth sets man free” is ringing the bell, loud and clear.

The question is: will one “un-ring” the bell immediately afterwards? Thousands of lies set in a split second later, perhaps?