Anyone Can be a “Champion”, Deep Down* 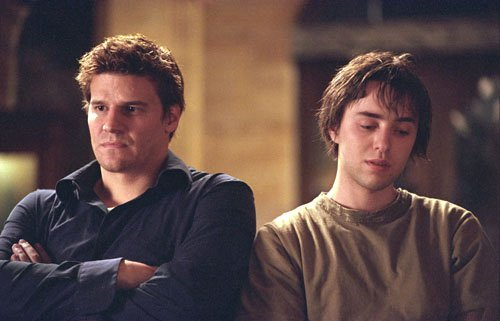 With a misguided self-righteous sense of vengeance and aiming to deliver punishment, Connor sank his father Angel to the bottom of the ocean. Afterwards, he pretended to be desperate and distraught while doing all his might to destroy evidence in order to cover his tracks.

​When Angel’s friends finally found him, he said to his unremorseful son, “There is a difference between wishing vengeance on someone and taking it. So now the question becomes: What do you deserve?” He continued by saying that what Connor did to him was unbelievable; however, while he was bound, stuck and starving at the bottom of the ocean, “I did get time to think, about us, about the world. Nothing in the world is the way it ought to be. It’s harsh, and cruel. But that’s why there is us – champions. Doesn’t matter where we come from, what we’ve done or suffered or even if we make a difference. We live as though the world were as it should be. To show it what it can be. You are not a part of it yet. I hope you will be.”

With these words, he gave hope to the Connors. And that’s all of us at one time or another. He urged us to rise above what we are naturally inclined to do when we felt we were injured by others.

“You are responsible for my misery”, a patient of mine yelled at his parents during an outburst in a therapy session.

Some people believe others are to blame for their unhappiness: their parents, their children, their spouses, their friends, their students, their professors, their colleagues, their bosses, their employees, the list goes on.

In response, I repeat those words of Angel’s, as with all the other times when encountering such mis-directed blames, with the hope that he would rise above his “natural” and yet “unhealthy” unexamined self. In this particular case, I failed miserably. He insisted that his parents were “against” him. Like Connor in Joss Whedon’s brilliant creation, he refused to look within.

As a challenge, he demanded to know how I wanted him to behave in the world.

I couldn’t help but repeat the words of Graham Greene’s in Ways of Escape, in which he described Sir Herbert Read, “…(he) could come into a room full of people and you wouldn’t notice his coming – you noticed only that the whole atmosphere of a discussion had quietly altered, that even the relations of one guest with another had changed. No one any longer would be talking for effect, and when you looked around for an explanation there he was – complete honesty born of complete experience had entered the room and unobtrusively taken a chair.”

Sadly, those words had no desired effect on the said patient.

One can only hope that one day he would rise above “Conner-ness” and become like Herbert Read.

Full of Sir Reads, the world, as Angel had envisioned, may just become “what it can be.”